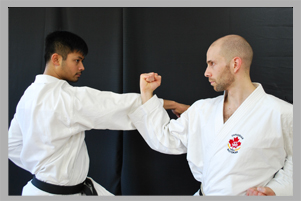 Sean Meehan began his karate training in the United Kingdom in 1990. But it wasn’t until he immigrated to Canada, and began training under Sensei Hanratty that he began to take his Karate training seriously. A national team member since 2003, Sean has competed on multiple continents and in local, national, and international levels of competition.

Recently Sean completed the Canadian Shotokan Karate Instructor Course and is an ‘A’ class level instructor.

Come visit CSKA for your first free lesson and train along side Sean Meehan.